This is the sensitivity of the sensor or film.

The lower the ISO the less sensitive the sensor/film is and the more light that will be needed to be let into the camera to form an image.

Normally you use as low an iso setting as you can get away with but in poor light conditions or when you want to use a faster shutter speed than light conditions allow, you may have to set a high iso setting. The performance of cameras at high ISO settings has improved greatly over the last number of years and many cameras can produce usable images at far higher ISO settings than was previously possible, eg the original canon 5D had a 50-3200 ISO range, the 5D mark 3 has an iso range of 50-102,400 (h2)  while the 1DX goes up to 204800 (h2).

The main effect that the aperture size has on a photograph is that photos taken with a large aperture have less depth of field which means that objects nearer or further away from the distance that you are focused on are more blurred.

Large apertures (eg f1.8 to f 8) are typically used when you want to isolate the object you are focusing on from its surroundings such as in a portrait shot. They are also used when the light is poor but you don’t want to use too high an iso setting or to slow a shutter speed.

Small apertures (f 16 and smaller) are used when you want everything in the shot  from the foreground to the background to be sharp such as in a landscape shot.

Medium apertures are used when the object or objects that you want to photograph have some depth but you still want to separate them from the background, They are also used when you would prefer to use a smaller aperture but can’t because of the light conditions.

Shutter speed is the length that the shutter is kept open.

Slower shutter speeds are often used to give a sense of motion by blurring objects in a photograph that are in motion, such as in a night shot when the moving headlights of a car suggest the movement of a car. They are also used to blur water in a stream .

Fast shutter speeds are used to freeze motion such as in sports photography.

With long telephoto lenses there is a chance that if you use too slow a shutter speed your image may suffer because of camea/lens movement  particulary if you are hand holding your camera, Because of this it is recommended to use a fast shutter speed with long lenses.

Putting all these together:

The following website has a virtual camera that allows you to see the effect that changing the settings of your camera has on a photograph. 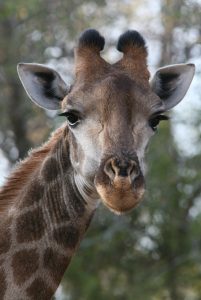 This shot of a giraffe was taken on a 300 mm lens with a 1.4x converter making a focal length of 420mm. I selected f 8 to take this shot as I wanted a lot of the head to be sharp while still blurring the background. If I had selected an aperture of f 16 or f 22 then i would risk too much of the background being sharp and consequently not separating the giraffe from the background, while if I had used f4 or f5.6 i would run the risk that the nose or the ears would not be sharp. 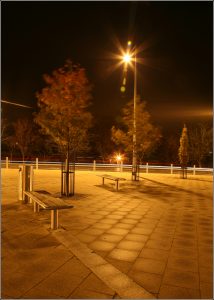 This shot was taken at f11 and a 30 second exposure at ISO 100. I didn’t think a smaller aperture was necessary as there was not much  in the distance that I needed to keep sharp and also because I would have had to increase the ISO if I used a smaller aperture. Due  to the 30 second length of the exposure i had to use a tripod. Many times when taking night shots with light trails if you use too small an aperture the light trails will be too faint 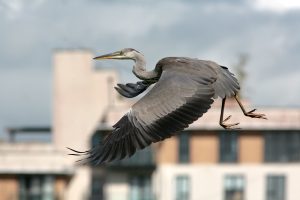 A heron. For this shot I knew i would need a fast shutter speed to freeze the flapping of the birds wings and his forward motion. I also knew that i needed to stop down the aperture otherwise the wings would be blurred due to insufficient depth of field. I chose f10 and 1/1600th of a second but had to bring the ISO up to 250 to achieve this.

For this shot taken 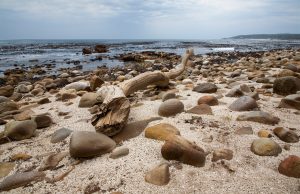 hand held in the cape of good hope nature reserve I choose a f stop of f13. As I was using a 24-105 mm lens at the 24 mm end I knew that f13 would give me enough depth of field to ensure that everything from in the foreground to a good distance away would be sharp. 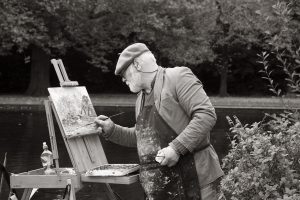 This portrait of a painter in St Stephens green was taken at f7 because while i wanted the background to be out of focus I needed the easel as well as the artist to be sharp. A smaller aperture would have risked the background been to sharp and distracting, while a larger one would not have enough depth of field to keep the artist and his easel sharp.