We can achieve this closer focusing by  main ways;

When using extension tubes the following formula must be born in mind. 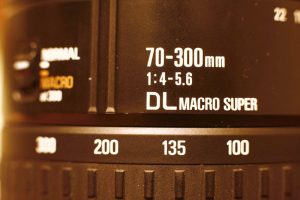 The following two photos show how effective extension tubes can be. The photo on the left was taken with a 50 mm lens at its closest focusing distance. The one on the right is the same 50 mm lens fitted with a 31 mm extension tube.

3 Close up filters:
These are attached to the front of a lens and may be the screw in type or the cokin type.
They are normally rated in diopters and work by shifting the plane of focus from infinity to a point dependent on the diopter of the close up element. When you fit a +1 diopter close up filter and focus the lens on infinity (according to the scale on lens) you will be in fact be able to focus on an object 1 Meter away , a 2 diopter filter will enable you to be focused on an object 1/2 Meter away. With a lens that whose closest focus is 2 Meters you can use a +1 diopter close up element which would bring its infinity focus to 1m and you can then focus on something even closer than 1 M . Close up filters have the advantage that they can be used when you have a non interchangeable lens.
Close up filters have the disadvantage that they tend not to be as sharp as other methods because of the additional lens.

These are not normally thought of as macro enabling devices. These are devices that fit between the lens and the camera but unlike extension tubes they contain a lens element and consequently can adversely affect quality. They modify the focal length of a lens by a given factor and cause a reduction in the amount of light it transmits, hence a 1.4 x converter will change a 300 F4 lens into a 420 mm F5.6, a 2 x converter makes it into a 600 F8. Canon call their teleconverters extenders. They are mainly used to magnify distant objects. These can aid macro photography because they don’t change the minimum focusing distance thereby magnifying the image size at a given focusing distance however they change the quality of the image.

5 Stacking lenses :
This is an advance technique which relies on using two lenses. In the example shown below a 200 mm f4 and a 50 mm f1.8 are used . The 200 mm is mounted on the camera like normal but the 50 mm is attached to it in reverse using a special adapter ring (2 cokin filter rings of the appropriate size can be glued together to make one of these ). The 50 mm lens in effect effect acts a highly corrected close up filter. Care must be take using this technique as vignetting may be possible. It is also advisable that the two lenses have a similar filter size. The magnification possible with this technique is equal to the focal length of the main lens divided by the focal length of the ‘supplementary’. Placing an extension tube between the main lens and the camera can help reduce vignetting.

In recent years a new technique for producing macro images has been created . Using the latest photoshop or other software it is often possible to take multiple shots of one object while changing the point of focus but not the position of the camera, when you the stack the images in photoshop the computer selects the sharpest parts of each image and blends the images all into one image.

Reversing lenses is an old technique that can be used to get greater than 1:1 magnification. It involves attaching a lens onto your camera backwards using a special adapter ring. One disadvantage of doing macro this way is that modern cameras rely on electrical contacts to communicate with the lens which it do when the lens is reversed. However many older lenses had manual step down of the lens and these work well with this technique.

For more detail and a video on this. Click on this link.

Taking macro photographs has problems that require a bit more care and attention than normal photography. The first of these is the limited depth of field available. Many times you are talking about a depth of field in the order of fractions of an inch. This implies that you have to be careful in setting up the camera (often on a tripod) in order to best make use of the available depth of field. This often means setting up your camera so that it is perfectly parallel to the plane the object is in. If you click on the link below you will find a table describing the depth of field available at various magnifications. Because of the limited depth of field you will find that you are using f11 f16 and above more often.

Table of the depth of field available at various magnifications and f stop settings.

The second of these is that autofocus is less use than normal. Normally when taking a macro shot you will have to choose which point in the shot you want in focus meaning you will have to manually focus on the area of the shot that you want sharp, relying on the AF will often grab the wrong area of the photograph to focus on.
Often times you will want to photograph the object at the largest size possible and in such cases it is common to focus your lens at its closest possible focusing point and then rock the camera back and forth so you can focus on the point you are interested in. This is simplified by the use of a focusing rack. These allow you to set the desiered magnification and the move the camera forward to focus on the desiered object using the rack and pinion slide without having to adjust the tripod.Care must be taken not to cast shadows on the scene.
Using mirror lock up and a remote release is recommended but not always possible.
If you wish to use flash when taking macro shots you have another problem because often the inbuilt flash on your camera will have its light output blocked by the lens or lens hood you are using. Specially adapted flashes such as ringflashes may be necessary although if you are not to close flashguns on the camera might be ok.

Macro photography has been an interest of mine for a number of years. I have prepared a PDF file with some example photos and additional information on basic macro photography which you can download below. Please note that the prices of the lenses mentioned in the pdf file were accurate when i prepared the file but may longer be accurate.